Dragons housing co-operative limited was established in May 2015 and we purchased our first property in August of the same year.

As a fully mutual par value housing co-op we are manaaged by those tenants who are resident and paying rent. We were established using the Radical Routes model rules which we obtained via Catalyst Collective.

We are also governed by the ethics and 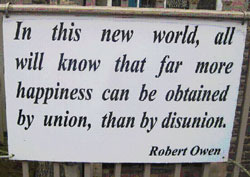 Photographed at New Lanark Mill, where Owen made his name.